Vegan news, discounts & more → sign up to our Newsletter.

About roots of compassion

Having started as an idea of two individuals who went to shows, protests and other events with yummy vegan chocolate cakes and information material, roots of compassion has, since its foundation in 2001, developed to become a well-known component of the German animal rights and animal liberation movement.

In 2002, we launched our website www.rootsofcompassion.org and since 2003 it is primarily run as an online shop, where you can find fairly and organically produced clothing and vegan products such as shoes, critical literature, food, buttons, patches, stickers and lots of other stuff.

Since 2008 we are publishing various kinds of media items related to veganism, animal liberation and social criticism through our publishing house compassion media.

Today roots of compassion is a collective of eight members and while it has developed into a more and more professionalized small business, it still holds on to its original goals, i.e. promoting veganism and criticizing exploitative social and economic relations and all forms of oppression. 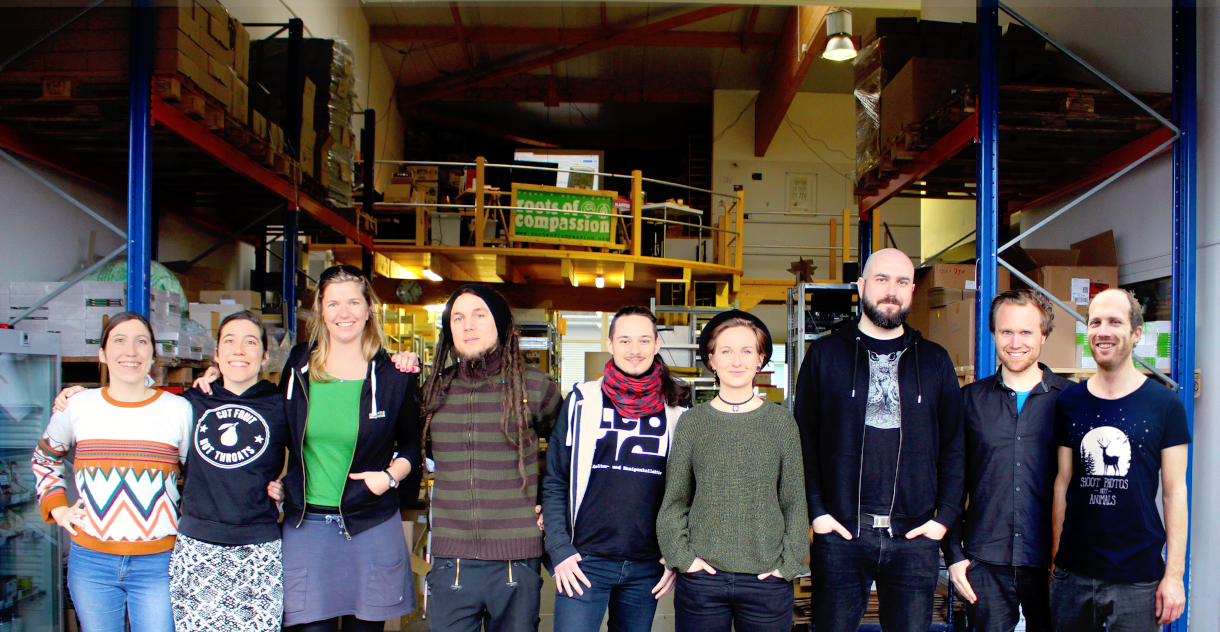 roots of compassion is a collective of emancipatory-oriented individuals critical of any form of sovereignty, with the objective of informing themselves and others about social injustices while pointing out and fostering alternatives. The products we produce and sell through our online shop, we mainly focus on the contemporary relation between humans and non-human animals, so we offer exclusively vegan products and food. In doing so, we’d like to encourage people to stand up for respectful and non-violent relations with other individuals and a conscious dealing with their environment. We find it important to offer certified organically produced products whenever they are an available option for us. Striving towards a more equitable economy, we are mindful of fair trade relations and working conditions. By cross-linking and working in the collective we try to establish alternatives to the capitalistic structures characterizing our society, towards a more solidary economy.

How we are planning to achieve our goals

As a collective we make decisions on a consensus-driven and egalitarian basis. All members of the collective are equal and have the same voice. We don't have a boss like most regular companies. Since May 2009 roots of compassion is a registered cooperative, so that our ideals are also reflected in our legal form. All members of the collective are employees of the cooperative and receive an equal hourly wage. Since the goals of roots of compassion do not consist in the accumulation of private capital but primarily in the realisation of our ideals, we define ourselves as a not-for-profit organisation. Most of the generated profits go directly into financing new products and projects. Furthermore, we support other active groups and initiatives indirectly by selling solidarity products as well as directly through financial and material donations.

We regularly support campaigns, projects and other groups that are in need of funding via donations or fundraising items.

By selecting "Accept all", you give us permission to use the following services on our website: YouTube, Vimeo, PayPal Express Checkout und Ratenzahlung. You can change the settings at any time (fingerprint icon in the bottom left corner). For further details, please see Individual configuration and our Privacy notice.

The settings you specify here are stored in the "local storage" of your device. The settings will be remembered for the next time you visit our online shop. You can change these settings at any time (fingerprint icon in the bottom left corner).

To view Vimeo contents on this website, you need to consent to the transfer of data and storage of third-party cookies by Vimeo.. This allows us to improve your user experience and to make our website better and more interesting. Without your consent, no data will be transferred to Vimeo. However, you will also not be able to use the Vimdeo services on this website.

Using express checkout and Displaying offers for payment in instalments for individual items or your entire purchase.

Would you like to see these contents? Activate the desired contents for one session only or allow the website to remember these settings. Once you have given your consent, the third-party data can be loaded. For this, third-party cookies might be stored on your device. You can change these settings at any time (fingerprint icon in the bottom left corner). For further details, please see the Privacy notice.